After 30+ years as a teaching professional, I can see a distinct shift in player’s attitudes towards competition and playing matches. Like most teaching pros today, I come from an era where the way junior players reached the highest levels was to play sets… lots of sets. Taking private lessons and even group lessons were the exception, not the norm. I remember that when we did do a drill, we were always pestering the pros asking “when are we gonna play.” Almost everyone I knew growing up had the same attitude and wanted to play more than we wanted to just drill or hit.

As I speak with my fellow pros and friends from around the country, they all relay a similar story. The unfortunate consequences are that at many clubs we are creating an army of players that can strike the ball well, but do not know how to compete or win. We pros have slid towards “teaching” and are doing less “coaching.” (That is why I ask my players to refer to me as coach.)

A few years ago, I began asking groups of junior players at my clubs which of the following three statements best described how they viewed themselves as tennis competitors. The percentages answered for each response are noted to the right of the questions.

The sad reality is that most of our junior players (70%) are walking around thinking that they are poor competitors, or worse, they view themselves as “losers” who can’t seem to win like they should. Most pros would agree that the average player in their clinics do not have a strong view of themselves as competitors.

The obvious conclusion is that players are not playing enough competitive matches. USTA studies have confirmed the same. In some European countries, junior players play as much as 3-5 times as many matches as their American counterparts.

So, how do we get players to play more matches in this culture that is often opposed to competitiveness? For years I have struggled with how to teach my players (and their parents) that a healthy tennis regimen will include training in the following four areas:

While all four areas are important, match play is the best vehicle for learning Strategy and Mental Toughness. If a player plays too few matches, they may be saving their egos, but the cost is their full development as competitors.

The lesson that I am trying to teach my parents and players is to look at “pressure” as a good thing and not as something to be avoided. Learning to deal with pressure is an integral part of becoming a mature competitor. I have found it useful to help my players understand the varying levels of pressure they can face when they compete. Below are some explanations of the various pressure levels that exist in tennis competition.

Pressure levels 1-2: have virtually no pressure at all. The defining characteristic of this level is no one is keeping score of any sort so there can be no chance to lose anything, therefore no pressure.

Pressure levels 3-4: are considered low pressure. The defining characteristic of this level is that now at least there is some kind of score being kept and there will be a winner and a loser. The pressure is still very low, few people will ever know or care who won.

Pressure levels 5-6: are considered medium pressure. The defining characteristic of this level is that now there is not only a winner, but now people will know the result and the player will have the result go on their permanent record.

Pressure levels 7-8: are considered high pressure. The defining characteristic of this level is that now the result of a loss would be very negative to the player’s rankings or the team’s standings. This is different than levels 5-6 where the losses would not be so devastating.

Pressure levels 9-10: are considered intense pressure. The defining characteristic of this level is that now the result of a loss would keep the player or team from reaching the next level of play. An individual may fail to qualify for sectionals or nationals and a team may fail to qualify for a regional or a state championship. These sorts of matches can end a players “year” and therefore carry the most amount of pressure.

Once my players have reviewed and understand these levels, they can easily assess their own regimens and determine if a change is necessary to their specific regimen.

A common realization on many players part is that they are doing way too many 1, 2, or 3 level events, thinking the whole time that they are on track to meet their competitive requirements. It is only after reviewing the chart that they realize that just hitting with a friend won’t cut it when it comes to developing into better competitor under pressure.

You may feel that 40 is not the correct number for the players at your club, or you may want to adjust the numbers based on player’s skill and/or commitment levels. The point is that a chart like this one is easy to understand and will make it more likely for our players to play more.

Every tennis match has a winner and a loser. It is our job to train our players to view competitive match pressure as a tool they can use to test their game and determine what areas they should continue to work on. If we cannot do that, we will likely never get them to play enough matches and the cost will be their full development as individuals and competitive tennis players. 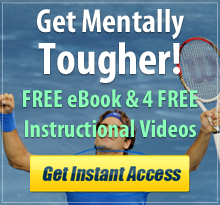